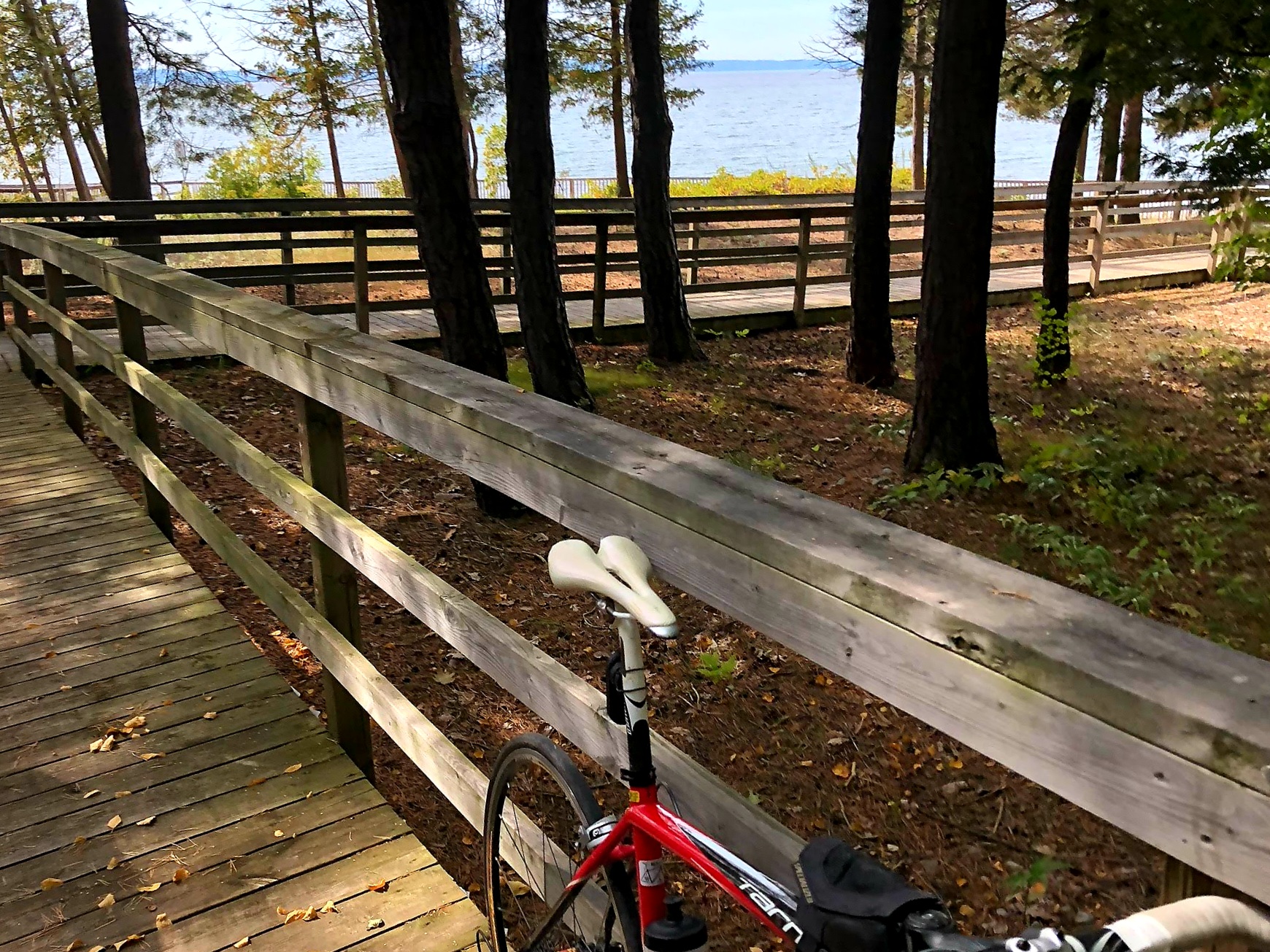 Tiny and Tay townships in Simcoe County are known for their rich history, adjacency to Georgian Bay, and… being the namesakes of dogs owned by Lady Simcoe, wife of the first Lieutenant Governor of Upper Canada. There are numerous great cycling routes in these townships, and we have merged a couple of them into a point-to-point route on our  Georgian Bay – Muskoka tour.  We start just outside of Waubashene and end in Wasaga Beach with an optional extension to Collingwood. It is mostly flat, with the notable exception of a hill out of Midland. Much of the ride is along the scenic shores of Georgian Bay. The route is about 77km one way. There is a link to the GPX file at the end of this post.

Stuff to know before heading out

This is a point-to-point route that is 77 km ONE WAY, so be prepared for a long day if you are going out and back. Alternatively, arrange for a shuttle back to the starting point.

If you are starting in Waubashene, there are a few parking spots where Coldwater Road intersects the Tay Shore Trail. If those are taken, check out Tay Township’s tourist map for other free parking options close by.

While overall this is a relatively quiet route, Tiny Beaches Road can be busy on summer weekends and the town of Wasaga Beach is always busy in the summer. Collingwood is quite bike friendly, but do study the city’s bike routes and paths before you go, as they can be a bit tricky to navigate. The route provided below ends just as you get to downtown Collingwood.

The Tay Shore Trail is a paved, multi-use trail that winds along the shores of Georgian Bay between Waubashene and Midland. It is mostly flat, with a few very short gentle rollers. It sneaks along between quaint cottages and their water access, and through wetlands, parks, and marinas. It intersects the historic Sainte Marie among the Hurons and the Martyr’s Shrine, and then, a few kilometres later, the Midland Harbour pops up to surprise you.

In Midland Harbour there are public washrooms and many great places to stop for refreshments.  Several benches invite you to sit and admire the waterfront and the public art.  An enormous stainless steel trumpeter swan by artist Ron Hunt flies gracefully above the parking lot, honouring the return of North America’s largest water fowl. One of Midland’s several whimsical, historical murals by the late Fred Lenz is in the harbour. At  80 x 250 feet, this depiction of Sainte Marie is said to be the largest historical outdoor mural in North America.

For the next phase of the journey, there is a hill to climb to get out of Midland. You will go up and up, and then finally be rewarded with a lovely, long downhill into Balm Beach. So put it in an easy gear and keep spinning until you get to the crest of the hill. Head up First Street, and then turn right on Yonge, which has a bike lane. Yonge eventually turns into Balm Beach Road. It can be busy, but there is a good, paved,  rideable shoulder. Enjoy this lovely agricultural section of Tiny Township. Soon after you pass through the small village of Perkinsfield, you will see beautiful Georgian Bay below you and the Blue Mountains off in the distance. This delightful vista is your reward for having climbed the hill.

At the bottom of the descent is Balm Beach, where there are public washrooms and several places for a snack. The beach is quite often busy in July and August, but fairly wide open in the shoulder seasons. Once you have admired the view and dipped your toes in Georgian Bay, it is time to head south on Tiny Beaches Road. This is a relatively quiet cottage road used by the residents and cottagers with places adjacent to the beaches of Tiny Township. There are frequent views of Georgian Bay, and several public access points to the beaches. Be aware that there are some turns to stay on Tiny Beaches Road. Tiny Beaches Road becomes River Road as you get close to the town of Wasaga Beach. The first couple of kilometres in the town of Wasaga Beach are quite busy with traffic, so take extra care.

You may want to end your trip in Wasaga Beach – have a swim, grab a bite to eat, enjoy the Bay. But, if you carry on to Collingwood, the ride becomes more than 75 km, which seems a good number for bragging 🙂  Collingwood is a great place to end or have a halfway break if you are doing the full out-and-back; there are many, many great places for food and drink. Check out the vibrant downtown based mainly on Hurontario Street.

Enjoy this route on a Humdinger tour

This route makes up most of Day 5 on our Georgian Bay – Muskoka tour, and the Tay Shore Trail section is on our Georgian Bay, Severn, and Simcoe Loop Trail tour.  You can also contact us about shuttles, luggage transfer, or a full custom tour.

Morning sun peaking over the some rolling Oro -Med

Plan ahead for spring and summer cycling getaways!

Cycling makes you happy! Join us in 2023 and exper

Conquering Grey County gravel and hills with an e-

Happy guest after 5 days of cycling through Bruce

Bike season is just around the corner - where will